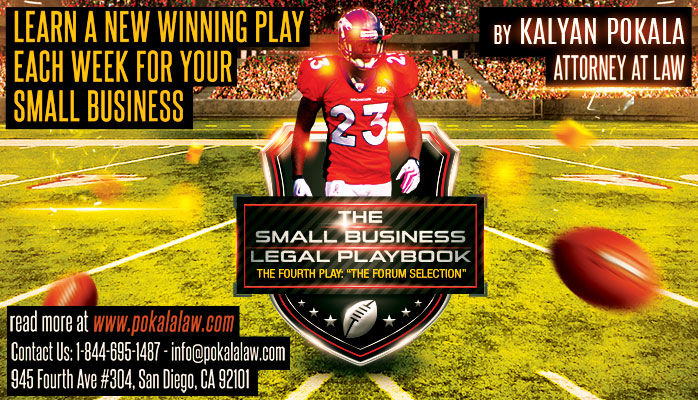 Welcome to another week’s Play from my Small Business Legal Playbook. I hope the tips are helpful to you and your business, as these Plays are specially designed to give you a little insight on the legal side of running a small business. People enter contracts on almost every day of their lives, often without realizing what they are agreeing to could be considered a contract. That may include clicking the “I Accept” button on a user agreement while installing a program on your phone or computer, or once in a blue moon they physically sign a contract. What’s my point? We’re entering contracts every day, but we’re often not paying attention to the clauses we don’t think are important. When it’s a contract for your small business, a single bad contract can be disastrous for your company’s long-term viability, or it can be a contract that leads to tremendous success.

For my small business clients, they often come to me once they’ve run into an issue with a contract that they have already signed. Oftentimes the dispute involves a situation where the other side isn’t delivering what needs to be delivered, or the other side is refusing to pay for services and/or goods my small business client has provided. But sometimes the dispute involves something that the parties overlooked at first: the forum selection clause. That’s the subject of Play #4, “The Forum Selection” from my Small Business Legal Playbook.

What is a forum selection clause? A forum selection clause is the section of the contract which dictates where a lawsuit related to the contract must be filed. This can give one party a tremendous advantage over the other, especially if the parties reside in different states, or worse, different countries. The local party will find it much easier to procure counsel, find witnesses, and won’t have to pay for travel and lodging in another place for themselves and their attorney. Those costs rack up quickly and often convince people not to file a lawsuit at all. Getting to pick where you do legal battle is a big advantage.

The problem with contracts is that they’re often too long, and they’re filled with language that feels repetitive and unimportant. So, by the time most people get half-way through the contract, they often start to skim over the parts they don’t consider deal breakers.

Offensive strategy: If there isn’t a problem yet, you can make sure that a forum selection problem doesn’t come up later by negotiating the terms of the forum selection clause to be explicit and fair for your small business and the other party. Oftentimes, the parties can come to a compromise where both parties will be satisfied. Those compromises usually involve the forum selection clause stating that both parties will be allowed to file a lawsuit in their respective local state or federal court house, with the other party not being able to claim that it’s unfair. A bonus to this arrangement is both parties deal with each other more honestly, with the knowledge that if they breach the contract, the other party will be filing suit in their county, a lawsuit potentially heard in a different city, county or state.

If the language suggests that the forum selection clause is exclusive, try and figure out if any part of your lawsuit is unrelated to the contract. If that’s the case, maybe you could make an argument for that part of the suit being heard by a local court. But I would suggest a much better idea is trying to work out your issues without even hinting of litigation, or be prepared to be asking your local attorney for a long-distance reference.

Hope you enjoyed this week’s Play, and stay tuned for next week’s play from the Small Business Legal Playbook! Remember to subscribe and get each play sent to you directly! Until then, may your businesses continue to thrive and your football teams be victorious. Keep playing to win!