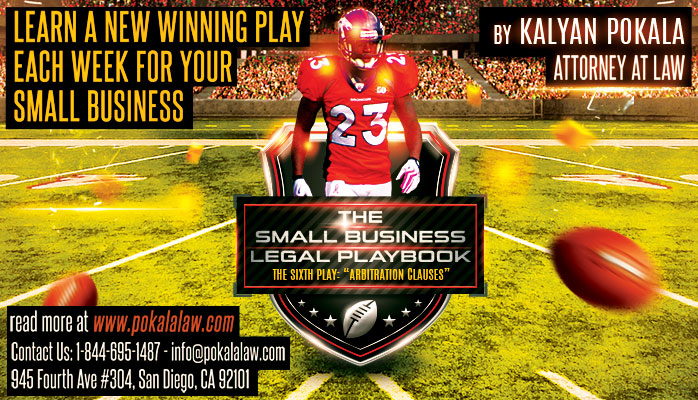 Welcome back to another week of the Small Business Legal Playbook! Play 6 is titled “Arbitration.” In some sports, arbitration means that the players and the teams agree ahead of time to allow a neutral third party to decide on the merits of the case, and they agree to be bound by the results. In the NFL, if a player disagrees with the league, they can ask for an arbitrator to hear their case and rule accordingly. The same thing applies here, all the parties involved agree to using an arbitrator rather than the court system to resolve their disputes related to the contract.

If you’ve ever signed a contract on behalf of your small business, you’re familiar with the boiler-plate language towards the end that says your business is agreeing to binding arbitration and waiving its right to have its day in court. But chances are that you haven’t thought too hard about making sure arbitration clauses are in the contracts that YOUR BUSINESS provides YOUR clients as well.

So why would you put an arbitration clause in your small business’ contracts? First off, it makes the costs more manageable if you want to make a contractual dispute official compared to taking things to court the old-fashioned way. Second, it makes the process go much more quickly when the parties are forced to arbitrate first. The California court system has suffered through some tremendous budget cuts and is currently incredibly backlogged. Arbitration makes a much more appealing option where the parties can reach a resolution in months, sometimes even years, before they would be able to do so if they went through the regular court system.

That’s all for this week. I hope you enjoyed this week’s Play, and stay tuned for next week’s play from the Small Business Legal Playbook! Remember to subscribe and get each play sent to you directly! Until then, may your businesses continue to thrive and your football teams be victorious. Keep playing to win!